Smart homes and support to those with Alzheimer’s

According to the United Nations, the average life expectancy of the population has increased. People are living longer each year. In  wealthy countries like the United States, Canada and Japan it is  estimated that in 2050, 32% of people will be over 60 years old (in 2006  the rate was 20%). In Brazil, according  to the IBGE – Instituto Brasileiro de Geografia e Estatística), about 64 million people will have more than 60 years in 2050,  almost 30% of the 215 million inhabitants of the country.

Aging  increases the probability that an individual will experience a decline in  vision, hearing, cognition and movement, restricting or even preventing  the execution of routine activities. For some seniors, the simple routine of cooking food in a microwave can become a daunting task. The  obstacles range from tiny letters on the product packaging to the door locks and inappropriate command interfaces that the ovens provide.

As the population increases and ages, the number of people suffering from  chronic diseases or with some form of disability grows. According to the work of Ron Brookmeyer, et. al,  Worldwide Variation in the Doubling Time of Alzheimer’s Disease  Incidence Rates in 2050, almost 100 million people (1.2% of world  population in 2050), four times the current number, will suffer from  Alzheimer’s. And, it is estimated that 43% of these cases require a high level of care, with continued monitoring. 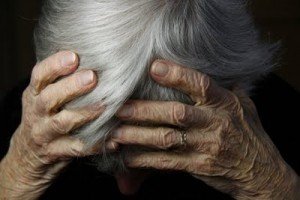 The  combination of all these data and projections with the high cost of  institutional health and social welfare is an incentive for the  development of new health services that will benefit from the current  availability of technological resources.

And how can the Smart Home help right now?

The  smart home technology is suitable to the monitoring of individuals with  Alzheimer’s because it can adapt to their needs in a gradual way,  according to disease progression.

In the first stage, the most notable symptom is loss of short-term memory and a certain disorientation of time and space. At  that stage the home monitors the actions of the individual and acts in a  way that meets their flaws without curtailing their activities and  without jeopardizing their security. A  housewife, for example, who uses the stove daily and begins to loose her memory can count on the automatic shutt of gas if the smart home  detects a situation of imminent risk of death even before there is  evidence of fire or smoke.

In the  second phase, with the decreased amount of neurotransmitters, the  individual finds it difficult to recognize and identify objects  (agnosia) and executing movements (apraxia). Home  automation systems are essential at this time, since they allow the  remote monitoring and control functions such as lighting, ventilation  and control of doors and windows, increasing comfort and independence  for people with reduced mobility.

At  a later stage, in which the patient has a low level of understanding of  the outside world and is no longer able to make decisions, the  residence change its programming to a higher level of restriction for  the purpose of maintaining the security of the individual and people who live with him.

In  this situation, the environment is less subject to the wishes of the  patient, raising the level of automation of services rather than waiting  for their interaction. Panic buttons or any other device that require the action of the patient are not operational at this point. The  information displayed at the interfaces are simplified and more  restrictive policies regarding the use of equipment and access to places of risk  are taken.

In the terminal phase  of illness when it is desirable to constant monitoring of patients by  health workers, the Smart Home provides its network infrastructure,  telephony and data equipment for home care by allowing the patient’s vital signs to be reported and monitored by a team medical, real-time.

Certainly, Alzheimer’s is not the only disease that afflicts people and their families. However,  for the purpose of study and development of products and services, the  symptoms recorded in each phase combine characteristics displayed by  many other diseases. Thus, it represents a major challenge for developers of Smart Homes to prolong  the independence of these individuals, as well as providing ways to  increase their safety and comfort.